By Bob Denney, PGA Historian
Published on Wednesday, May 27, 2020
Golf was evolving into a power game by the end of the 1950s, making many courses obsolete for hosting major championships. Former USGA President Totton Heffelfinger, who was born on Lake Minnetonka, saw the wave of change approaching and formed an investor group, nicknamed “The Syndicate,” to address it.
When the group’s then-titled Executive Golf Club of Minnesota in Chaska, Minnesota, neared completion in late 1962, few could have guessed it would fast-track its way to a major. Those doubters underestimated Heffelfinger’s clout.
First, there was a name change. The club’s Board of Directors passed a resolution in June 1962 rechristening the club to Hazeltine National Golf Club. The name heralded the club as a destination for the game’s premier players and favored its natural resource, Lake Hazeltine.
The lake was named after the Hazeltine family of Carver County, whose most famous member was Susan Hazeltine, the county’s first schoolteacher in 1855. Susan may be the country’s most revered instructor when it comes to bodies of water: Minnesota also named Lake Susan, seven minutes northeast of Hazeltine near Chanhassen, in her honor.
Second, Chicago architect Robert Bruce Harris was enlisted to survey the 725-acre property 20 miles southwest of Minneapolis, then replaced by Robert Trent Jones Sr., who won the task of converting dairy farmland into rolling parkland. In 1966, the club hosted the U.S. Women’s Open won by Sandra Spuzich; four years later, its first U.S. Open, won by England’s Tony Jacklin.
In 1970, the difficulty of the course and windy conditions sent scores skyrocketing and players into fits over Jones’ design. The famed architect would spend the next two decades remodeling, straightening doglegs, relocating holes and rebuilding greens. In the past two decades his younger son, Rees Jones, assumed the mantle of reconstruction: today’s Hazeltine checks all the boxes for challenges and playability.
Hazeltine joins Pinehurst Resort as the only U.S. sites to host a U.S. Open, PGA Championship, U.S. Senior Open, U.S. Women's Open, U.S. Amateur Championship, and a Ryder Cup.
It’s where the Tiger Woods mystique vanished – twice in a PGA Championship – with Rich Beem triumphing in 2002 and South Korea’s Y.E. Yang stunning the world with a Sunday run in 2009.
In 2016, the United States recaptured the Ryder Cup in front of a raucous Minnesota gallery. That week’s success, coupled with the rave reviews of attendees, helped Hazeltine become the first U.S. club to host a second Ryder Cup, scheduled for 2028. 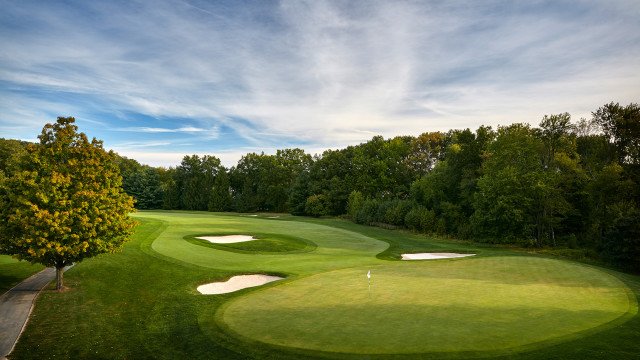