Published on Saturday, December 11, 2021
With 2 Low Professional Honors in 8 PGA Championship appearances, PGA Professional Rob Labritz is no stranger to the big stage. But the Director of Golf at GlenArbor Golf Club in New York really showed off this week at the Final Stage of the PGA Tour Champions Qualifying Tournament.
Labritz shot a closing-round 64 to win the Final Stage of Q School by 3 strokes. With 79 golfers in the field, Labritz had to bring his A-game to claim his Champions Tour card. And after posting scores of 65-71-67-64, it’s clear that he had no problem bringing it.
A lesson in consistency, Rob Labritz carded 1 eagle, 18 birdies and just 3 bogeys on his way to earning Medalist honors at TPC Tampa Bay. Labritz became emotional while celebrating his victory, "I have an opportunity now to just showcase my golf game and get a bigger reach to people and make impressions and teach more and it's a dream come true."

Rob Labritz did it and all the emotions poured out as the three-decade club pro secured his card for 2022. pic.twitter.com/N5IxHM08Zq

By earning his Tour card, Rob Labritz is eligible compete in the 2022 PGA TOUR Champions season. He’s also played in 3 PGA TOUR events in addition to his impressive play at both the PGA Championship and PGA Professional Championship.
Congratulations Rob, we are all cheering for you!

And now, Medalist at Final Stage of Q-School to earn a @ChampionsTour card for 2022. 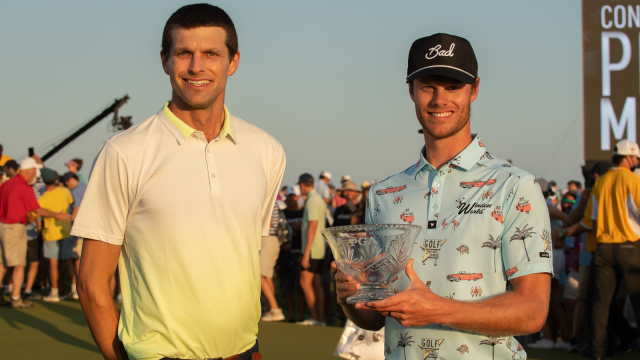 PGA Professionals Who Have Made the Cut at PGA Championships