Rise and grind, it’s time for Round 2 of the KPMG Women’s PGA Championship. We witnessed history in round one when In Gee Chun tied the record for the lowest opening round in this major championship. On top of that scintillating score, her five shot lead ties an LPGA record for the largest 18-hole lead in a major. Thanks to the support of KPMG Performance Insights, we can see just how In Gee rewrote the record books on Thursday.
Chun made nine birdies yesterday. She began her day on the Par 3 tenth hole with a three. She then birdied the Par 5 eleventh and parred her next couple holes. Starting on the fifteenth hole she birdied four holes in a row to close her first nine holes. With momentum, she moved to the front. The first hole caused a quick stumble, and she carded a bogey.
After that, In Gee made three more birdies in a row. In that six under par eight hole stretch she made seven birdies and one bogey! She finished her back nine with one last birdie and walked off the ninth green to a chorus of congratulations.

It was a record-tying day at Congressional.

Here’s how things stand heading into the second round of the #KPMGWomensPGA.@ROLEX pic.twitter.com/x79gtJB3fC

You don’t make nine birdies without a strong approach game. As In Gee made history, she set a standard on approach that may never be matched. From 175-200 yards her average proximity to the hole was 9’6”. The LPGA average from that distance this season is over 41 feet! Great long iron/hybrid approach play stems from an ability to get the ball into the air.
When you watch Chun’s swing action it’s easy to notice how long and languid it is. It reminds me of two other Congressional champions: Rory McIlroy and Ernie Els. If In Gee has a move to copy, it’s an ability to increase her arc through the ball. When hitting your fairway woods and hybrids, focus on a shallow approach to the ball. Don’t lift the club, rather brush the ground on the takeaway. Don’t lock your elbows, rather stretch your arms through the entire swing so you look like this.

The second key to scoring is always putting. Chun made 83% of her putts from 5 to 10 feet. The LPGA average in that range is 56% and In Gee’s success rate this season in that scoring zone on the green is 47.4%. Cashing in on those opportunities is the difference between 64 and second place 69. In Gee was 5 for 6 and never looked back.
Putting yesterday, she was rock solid. Watch as her lower body supports her torso. She turns from her ribcage and keeps the spine steady. There’s no lateral movement and the arms swing fluidly. Too many times amateurs try to propel the ball with their body. Instead In Gee displays how a steady body creates mobility in the stroke. That delivers a consistent strike on the ball. I walked a couple holes with In Gee yesterday and it was amazing to see her speed control on the greens. Every putt was around the hole with a chance to go in.

It’s inspiring how much KPMG has elevated the PGA of America’s flagship women’s championship. Statistical insights like they provide tell a very efficient story. InGee Chun’s historic day is tough to putt into PGA coaching words without their help. We’ll be back again after round two to breakdown the next set of amazing analytics alongside the day’s best story. 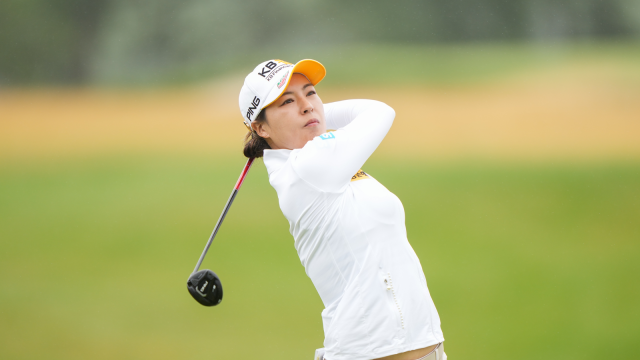 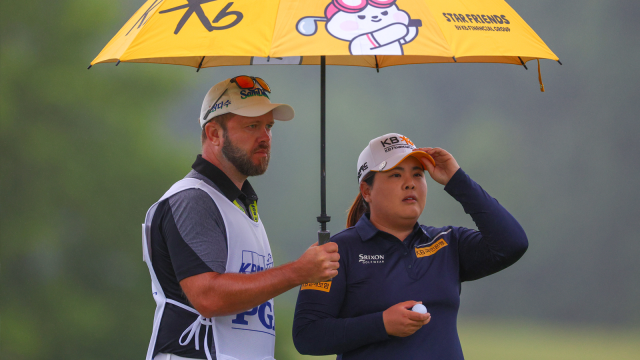 A Little Rain Can Help on the Course 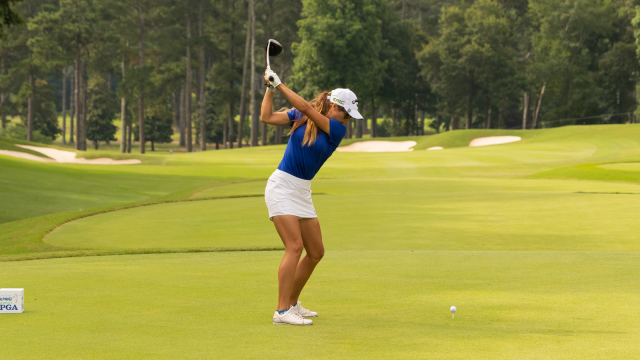