Published on Tuesday, May 18, 2021
While competition is a big part of the PGA HOPE Secretary’s Cup, this annual start to PGA Championship Week is much bigger than bragging rights and trophies. Still, local knowledge paid dividends at the 2021 event, a 9-hole golf competition for military Veterans who have participated in the PGA HOPE (Helping Our Patriots Everywhere) program.
On spectacular Kiawah Island, camaraderie, countless fist bumps and big smiles lit up Osprey Point Golf Course, as 24 Veterans, alongside their PGA Member coaches, embraced the opportunity to play during a special day for golf.
“PGA HOPE is literally enhancing, changing and saving lives, and when you hear that message directly from the family members of participating Veterans, it’s very powerful,” said PGA of America President Jim Richerson, the Senior Vice President of Operations for Troon in Scottsdale, Arizona. “Veterans have sacrificed so much, and the work that our PGA Professionals are doing is truly making a difference. I’m so proud to be part of this program, and of the PGA’s commitment to grow PGA HOPE.”
Due to COVID-19 travel restrictions this year, six teams from the Carolinas PGA Section competed on-site at Osprey Point, and teams from PGA HOPE Northern California (TPC Harding Park), PGA HOPE New Jersey (Ridgewood Country Club), PGA HOPE Kentucky (Valhalla Golf Club), PGA HOPE South Central (River Oaks Golf Club), PGA HOPE Western New York (Country Club of Buffalo) and PGA HOPE Metropolitan (Woodside Club) competed at remote venues across the country, with the remote teams taking part in the opening and closing ceremonies through a live stream.
Team Kiawah Island, led by Josh Wagaman, PGA, and Team Southern Pines I, led by Jim
Hardy, PGA, finished tied at 10-under par. The tiebreaker was a scorecard ruling with Team
Kiawah Island claiming the title. Wagaman, the PGA Head Golf Professional at Cougar Point
Golf Course at Kiawah Island Golf Resort, has served as a PGA HOPE Instructor for the past
four years.
PGA HOPE, the flagship military program of PGA REACH, introduces golf to Veterans with disabilities to enhance their physical, mental, social and emotional well-being. All PGA HOPE participants are military Veterans living with physical or cognitive challenges including PTSD, TBI and amputees, among others.
Chris Nowak, the passionate PGA HOPE Military & Veteran Liaison who served as emcee during the opening and closing ceremonies, delivered a powerful message.
“It takes a Nation to heal a Veteran, and if you look around at my fellow Veterans, PGA HOPE is saving lives,” Nowak said.
A special highlight of the day was the Old Town 5, a group of teenagers, (Fisher Kennedy, Preston Howe, Rhodes Baker, Robert Gefaell and Kyle Haas) from Winston Salem, North Carolina, who were introduced by Richerson during the opening ceremonies. The group raised more than $18,000 in the 100 Holes of HOPE program -- a 100-hole marathon golf round fundraiser -- in support of PGA REACH Carolinas.
“It’s truly rewarding to be involved with the HOPE program,” said Brian Oliver, PGA Coach for PGA HOPE Team Asheville. “The positive impact that hitting a golf ball can have on a Veteran’s life is amazing, and I wish I could do this every day.” Oliver is one of four PGA HOPE national trainers, and travels the region conducting PGA HOPE training sessions with fellow PGA Members. He’s passionate about getting PGA Professionals involved with the program, while ensuring they are comfortable using adaptive equipment and working alongside Veterans with physical or cognitive challenges.
“Veterans are often resistant to other forms of clinical therapy, but the opportunity to get outside on a golf course, alongside fellow Veterans, is about much more than hitting a golf ball,” said Harold Hill, a 31-year Veteran of the U.S. Coast Guard. “It really serves as the best form of therapy.
“We made some eagles, and missed some birdies, but I have to say, shooting par on this golf course is a pretty good day.”
After the closing ceremony, Hill quickly changed his outfit and headed off to his afternoon gig as Hole Captain at The Ocean Course for this week’s PGA Championship.
A fitting honor for one of America’s heroes.
For more information on PGA HOPE, visit PGAREACH.org. 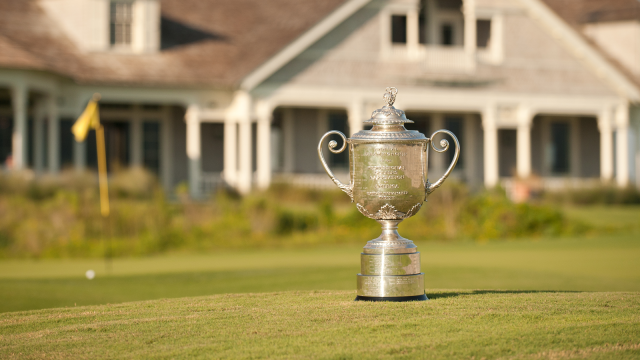 How to Watch the 2021 PGA Championship 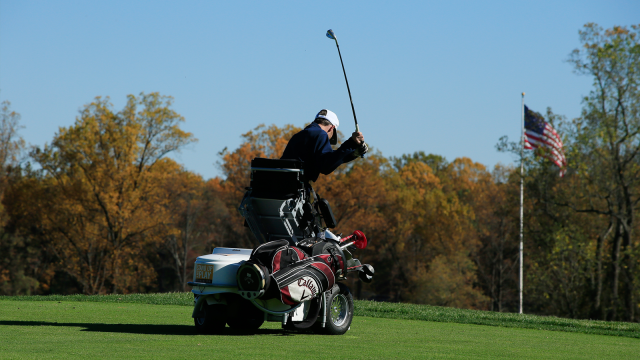