By Bob Denney, PGA Historian Emeritus
Published on Monday, September 28, 2020
Editor's Note:  The PGA of America celebrates Hispanic Heritage Month by highlighting Latinx PGA Professionals making an impact in the game and business of golf. We recognize that as we look to grow the game and business of golf inclusively, learning more about each other's backgrounds and cultures will only help us develop along that path.
From the moment she picked up a golf club at age six, stroking a putt like wielding a broom, Tanya Dergal was swept away by the experience.
“It was a game, and I loved it no matter what happened when I hit the ball,” said Dergal, recalling the baby steps of a career that led to becoming the first PGA Director of Instruction at Brentwood Country Club in Los Angeles. “I love the pace of my career. I love the PGA, growing the game and making players better.”
More from PGA

Born and raised in Durango, Mexico, the 36-year-old Dergal is one of 1,300 female PGA Professionals, but one of only 36 female PGA Professionals of Hispanic descent and the first female from Mexico elected to PGA Membership. Today, she teaches students from age 6 to 85—and from beginners to one handicappers.
“I enjoy every minute,” said Dergal. “You treat each student like a true player. If they are invested in their game and trusting you with their game, you should be invested in their game as well. I learn from all my students.”
Dergal was a fast study in golf, benefiting from the support of her father, Eduardo, a construction developer, mother Thelma, and brother Eduardo Jr., all who played the game. Club Campestre de Durango was her training ground.
By age 9, Dergal represented Mexico in the Junior World Championship and finished sixth, missing a trip to Japan by a stroke. That taste of the spotlight sparked her to work harder. She also had a role model to follow, fellow Mexican Lorena Ochoa, who was three years older and someone Dergal had followed through the junior ranks.
“She inspired a country,” said Dergal, who as a 16-year-old joined Ochoa on Mexico’s national team in the 19th World Amateur Team Championship in 2000.
Two years later, Ochoa turned professional. Dergal competed on three more national teams, through 2006.
At 17, Dergal said she had “one of the most important moments” of her career in July 2001 at the Junior World Championship in San Diego. Realizing that her opportunities for a scholarship were limited, Dergal finished third before a gallery filled with college coaches. Her performance earned her a full scholarship to the University of Southern California.
“To come from a small town in Mexico and earn a full scholarship to USC was a turning point in my life,” said Dergal. “We didn’t have that many junior tournaments back in the day. We had one or two tournaments in the U.S. to play well and have people look at you.”
Dergal made an instant impact, helping the Women of Troy to the 2003 NCAA Golf Championship her freshman year. It was the first national golf title, female or male, in school history.
Her plan was to become a tour professional, but the economics major had a backup plan: stock trader. “You never know what may happen, but things turned out for me where golf took over,” she said.
Dergal earned her LPGA Tour card in 2009 and competed for the next three seasons. She gradually transitioned to a career in teaching, starting at Alhambra (California) Golf Club and splitting her day by coaching evenings at Pico Rivera (California) Golf Club, a lighted municipal facility.
“The heavy Latino population at Pico Rivera was welcoming and inviting,” said Dergal. “They supported me and it really helped my career.”
Dergal is in her fifth season at Brentwood, where she created a guest instructor program with her team. “We invite local teachers to learn from top instructors,” she said, “and they don't have to drive far.”
She also hopes her success may inspire more Latina women to build a career in golf. “There is progress,” said Dergal, “but at the same time we are at less than five percent at the PGA Meetings. I would like to see more female Directors of Instruction around the world.”
The 130 women golfers at Brentwood interact with a team of instructors, according to PGA Director of Golf Patrick Casey, a former two-term president of the Southern California PGA Section.
Casey, who hired Dergal, is part of a Brentwood instruction team that includes Head Professional Emeritus Bob Harrison, in his 55th season at the club; PGA Head Professional Eric Temena and Teaching Professional Jason Nunez.
“I’ve always been a big believer in inclusion and hiring the best person for the position,” said Casey. “She has made a positive impact.
“Tanya has a strong clientele of members. She’s taken programs we’ve had and grown them. She’s taken our women’s and player development clinics and enhanced them.”
Maintaining a 45-hour weekly schedule at Brentwood Country Club is just part of Dergal’s focus. She and wife Lisa Martin are parents of five-year-old twins -- daughter, Camila and son, Luca.
“I feel that there are always opportunities, but you have to work a little more to find them,” said Dergal.
During one of the most challenging of golf seasons, Dergal said she is blessed.
“We are lucky in golf during a pandemic,” she said. “We are busy, the game is being played. Our lesson schedule is full.”
When the pandemic passes, one of Dergal’s trips is to visit family and friends and Club Campestre de Durango. In May 2012, the club unveiled a plaque at the practice range, dedicating “Tanya Dergal Meraz (her mother’s family name) Practice Tee.”
“Having the practice range named after me was a great honor,” said Dergal. “I spent countless hours there. It’s a very special place in my heart. Hopefully, it’s a place where our sport continues to grow and create some champions.” 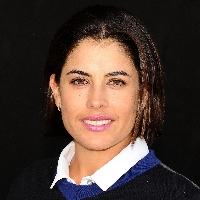