The overall winners pose for a photo on the 18th green after the Drive, Chip and Putt Championship at Augusta National Golf Club on April 03, 2022 in Augusta, Georgia.Getty Images

Eight junior golfers – four boys and four girls – were crowned champions at the eighth Drive, Chip and Putt National Finals held today, Sunday, April 3, at Augusta National Golf Club and broadcast live on Golf Channel across North and South America.
Conducted in partnership with the Masters Tournament, USGA and the PGA of America, Drive, Chip and Putt is a free youth golf development initiative for junior golfers of all skill and ability levels, aimed at sparking a lifelong interest in the game. The three-pronged competition welcomes boys and girls, ages 7-15, in four age categories, and tests the skills essential to golf: accuracy in driving, chipping and putting.
More from PGA

Tens of thousands of participants seized the opportunity to qualify for the event, which began with more than 300 local qualifiers at courses across all 50 states in the summer of 2021. Fromthere, the top finishers advanced through more than 60 subregionals to one of 10 regional qualifiers at some of the nation’s most acclaimed venues and championship sites.
Finally, the 80 regional winners across the four age divisions (40 boys and 40 girls) earned a trip to Augusta National Golf Club to participate in the Drive, Chip and Putt National Finals.
The four girl champions were: Autumn Solesbee of Huntersville, N.C. (ages 7-9); Kylie Chung of Cumming, Ga. (ages 10-11); Jenna Kim of Raleigh, N.C. (ages 12-13); and Mia Hammond of New Albany, Ohio (ages 14-15).
The four boy champions were: Hudson Knapp of Marietta, Ga. (ages 7-9); Bentley Coon of Horton, Mich. (ages 10-11); Michael Jorski of Clarendon Hills, Ill. (ages 12-13); and Jaden Dumdumaya of Fairfield, Calif. (ages 14-15).
“When we founded Drive, Chip and Putt along with the PGA of America and the USGA, our hope was to create a starting line into golf to inspire these young boys and girls to pick up a club,” said Fred Ridley, Chairman of Augusta National Golf Club and the Masters Tournament.
“What we’ve seen in almost a decade since we started is a number of these young players have graduated into playing elite amateur events and collegiate events.  We had eight graduates of Drive, Chip and Putt in the Augusta National Women’s Amateur earlier this week.  But, equally as important in our efforts to grow the game are the tens of thousands of boys and girls who play in Drive, Chip and Putt qualifiers in all 50 states. We believe and hope Drive, Chip and Putt will encourage them to continue to play golf and play for a lifetime.”
“The boys and girls who competed in Drive, Chip and Putt this year are absolutely amazing,” said Jim Richerson, President of the PGA of America. “Every year, we get to witness how these exciting junior golfers interact with our PGA Professionals at the grassroots level, through our PGA Jr. League programs across the country and in the Junior PGA Championships. Drive, Chip and Putt is further evidence that these young players are realizing their potential by competing at Augusta National Golf Club. Congratulations to each of the winners, and we'e excited to see your games develop even more in the future.”
“These juniors are the next generation of champions, and they’re inspiring all of us to play and love the game more,” said Mike Whan, CEO of the USGA. “It’s why we’ve partnered to grow this program, to make it accessible in every state, and to continue to build pathways to introduce more people to golf. We can’t wait to see what these talented players will do next, and who will follow them next year.”
Click here for all final results.
Points were awarded in three individual skill categories (driving, chipping and putting), with the winner in each skill receiving 10 points, second place receiving 9 points, and so on, all the way down to 1 point. The player with the most points following all three competitions was declared the overall winner of the age group.
In the drive portion, the better of two distances was used for the score. Each golfer then took two chips; the closest cumulative distance to the hole determined the winner. Players then moved to Augusta National’s 18th green where they attempted two putts – from 15 and 30 feet – and used the cumulative distance from the hole to determine the score.
Here are individual age group summaries:

After finishing fourth in driving and winning the chipping discipline, Autumn Solesbee of Huntersville, N.C., headed to the storied 18th green at Augusta National Golf Club. She hit her first putt within five feet of the hole, and then within one foot on her second attempt. Realizing she had clinched the win for her age division, Solesbee grinned ear to ear.
“I was so nervous,” she said of having the crowd watch her compete. But, she shared that “My dad always says being nervous is a superpower because it shows how much you care.”

Jenna Kim of Raleigh, N.C., proved to be a dominant competitor, starting off the day by taking second place in both driving and chipping. Heading into putting, Kim had tallied 18 points and was tied with Emerson Roychoudhury of Leesburg, Va. She kept her composure for two solid putts, knocking the second attempt less than a foot away from the hole and securing the overall win.
“It means a lot because I’ve been working to get here for a long time,” Kim said of her victory. “It is crazy to think about all the professional golfers who have been here. To be here myself is very exciting.”

With a second-place finish in both driving and chipping disciplines, Mia Hammond of New Albany, Ohio, sat atop the Girls 14-15 leaderboard. On the 18th green, she expertly sunk both putts. However, Ella Walsh of Tucson, Ariz., also knocked both her putts in, forcing a putting playoff. In Hammond’s third putt attempt, her ball stopped just short of the hole but close enough to solidify the win in putting and the overall age group.
“It has been so hard to take it all in,” Hammond said of the last few days preparing for the National Finals. “It has always been a dream of mine to make it to Augusta National – whether it’s to watch the Masters or play in this tournament.”

First-time competitor Hudson Knapp of Marietta, Ga., delivered strong performances across the board on Sunday. After placing fourth in driving and fifth in chipping, Knapp steadied himself for the putting green. Thanks to his 30-foot putt stopping within one foot of the hole, he won his age group by a one-point margin with 22 total points.
Knapp said putting isn’t typically his strongest discipline, but he remembered the tips his dad and coach taught him. Of his first trip to Augusta National, he said, “I thought the course was in brilliant condition, and I wasn’t going to win.” But he was able to surprise himself and bring home first place.

Bentley Coon of Horton, Mich., started the day off strong, driving the ball 225.7 yards to win the driving discipline. He followed up with a second-place finish in chipping and tied for fifth in putting. Though he said he was nervous about the fast greens, his putts were consistent, both within three feet of the hole to clinch first overall in the Boys 10-11 division.
Coon described his first experience at Augusta National as better than he ever imagined. “It was ana mazing course, especially driving down Magnolia Lane,” said Coon. “I heard the drive would be great. It gives you one of those feelings where all you want to do is go out and hit them straight, chip them close and make the putts.”

It was a thrilling day for Michael Jorski of Clarendon Hills, Ill. in his second Drive, Chip and Putt National Finals appearance. Following a eighth-place finish in the driving discipline, Jorski upped his momentum with a chip that landed within two feet of the hole. He then sunk his first putt, and his second putt stopped just eight inches away of the hole. At the end, Jorski and Jacob Thompson of Louisville, Ky. were tied for the overall lead – but in a playoff, Jorski’s third putt attempt edged out Thompson for the win.
“It gives you an adrenaline burst and only makes the next putt harder,” Jorski said of sinking his 30- foot putt. “It proves to me I can play well even when I’m nervous. It took me 27 great shots or so to get here today. If even just one of them went wrong, I might not be. It’s a dream to come out here and win this.”

With 261.7-yard drive, a first chip within two feet of the whole and a hole in one, Jaden Dumdumaya of Fairfield, Calif., became a Drive, Chip and Putt National Champion. His victory signals the largest winning margin in Drive, Chip and Putt National Finals history (10 points).
“It means a lot to me,” Dumdumaya said, reflecting on his win at Augusta National today. “I’ve been working toward this for six to seven years, and to win it all after trying for that long of time is something I’m very proud of.”
The 2022-23 Drive, Chip and Putt qualifying season, with 350 free local qualifiers in all 50 states for boys and girls ages 7-15, is also now open for registration at drivechipandputt.com. 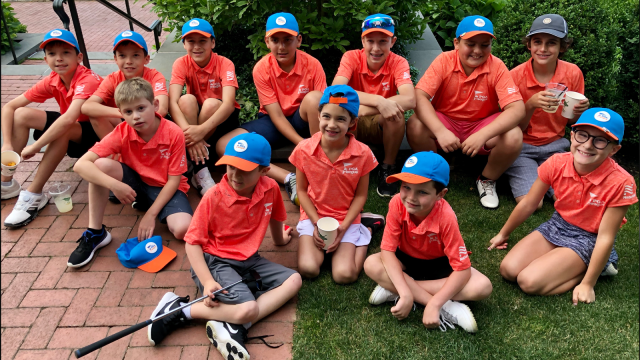 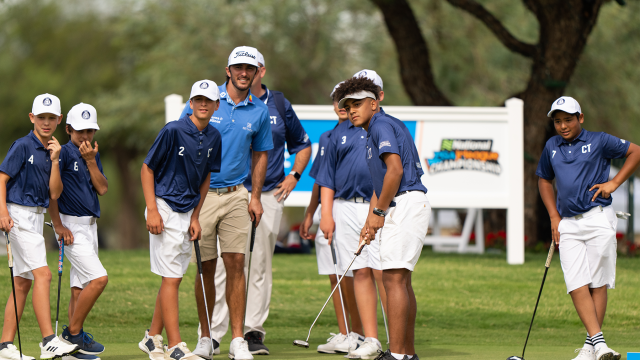 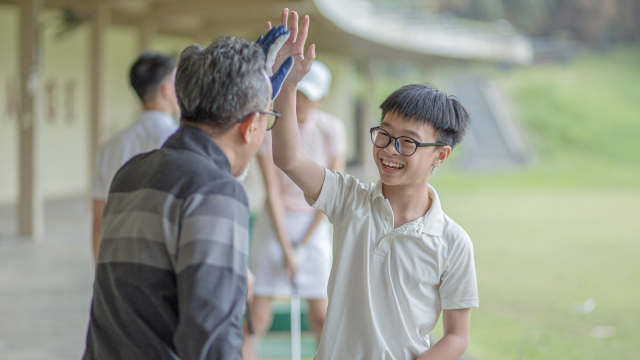 New Ways to Get Your Family Golfing