The Ocean Course Overview: The 3rd

Editor's Note: This is part three of a five-part series that overviews The Ocean Course in advance of the 2021 PGA Championship. Andy Johnson is the Founder of The Fried Egg, a website and podcast that covers golf course architecture and professional golf.
Short par 4s are all the rage these days. They’re even starting to show up at major championships.
At this year's PGA Championship, early in their rounds at the Ocean Course at Kiawah Island, players will encounter an excellent short par 4 in the 3rd hole. Between its clever design, its flexible teeing grounds, and the ever-changing winds of the South Carolina Lowcountry, the 3rd should provide plenty of entertainment.
The best way to understand the strategy of this hole is to start at the end point. Perched high up and surrounded by short grass, the green repels balls in all directions. In addition, it is shallow and wide, making distance control paramount. So the 3rd green is hard to hit not just with a driver but even with a wedge, especially when the wind is up.
What all of this means is that the decision to go for the green from the tee is not an easy one. If you let it fly, you might end up in a bad spot; but if you lay up, you’re not guaranteed an easy approach.
Another key aspect of the 3rd hole at the Ocean Course is its overall angle. Like all of the first four holes, it plays in a general easterly direction, but the tee is to the left of the 2nd green, creating a tricky angle. In order to hit the green, you have to go straight over the large bunker and the saltwater marsh on the left. As Kevin Moore, co-founder of Golf Blueprint and expert on course management, puts it, “With the way the hole sits, if a player is privileging the fairway, they have to bring the bunker into play.”
Further complicating the decision to try to drive the green is the distinctive hazard short of the green: a sandy waste area with two trees growing out of it. If you bail slightly right of the most aggressive line, this is where you’ll find yourself. Balls can ricochet off the limbs of the trees—or even get stuck, as one of Rory McIlroy’s drives did in 2012. The sand and trees don’t just penalize slightly errant go-for-it attempts; they also limit the benefits of aiming just short of the green. As a result, those who choose to lay up will do so farther back.
Had Dye positioned the tee directly behind the 2nd green, the threat of sand, marsh, and trees wouldn’t be as acute. At the same time, the hazards leave players with about 60 yards of wiggle room before penalty strokes enter the equation. This is a wide enough margin to entice players to give it a go.
In fact, that’s exactly what Kevin Moore suggests elite players should do. “Assuming the ball isn’t going to roll 50 yards through the back of the hole,” he explains, “you have to trust that if you get it up by the green, you’ll be able to either 1) pitch it to 20 feet if you’re completely out of position, or 2) pitch it close if you’re in position. Either is going to match or beat the expected scoring with a [full] wedge.”
Indeed, the safe play on the 3rd hole is no picnic. A ridge runs diagonally across the fairway, creating uneven lies and compounding the difficulty of the short approach to the repelling green. Also, the wind—whether it’s crossing, into, or down—will almost certainly mess with players’ ability to control the distance of their wedge shots.
But if the standard play on the 3rd is beginning to seem obvious, keep in mind that the hole has a wide range of tee positions. It measures 390 yards from the tips, but expect to see it play much shorter than that on at least one day. On Saturday at the 2012 PGA Championship, for instance, the 3rd was drivable for the majority of the field.
The 3rd at the Ocean Course is a treacherous, strategic hole that offers the PGA and Chief Championships Officer Kerry Haigh a chance to explore a variety of setups. It should be fun to see how the world's best players attack the hole, and how their tactics change from one day to the next. 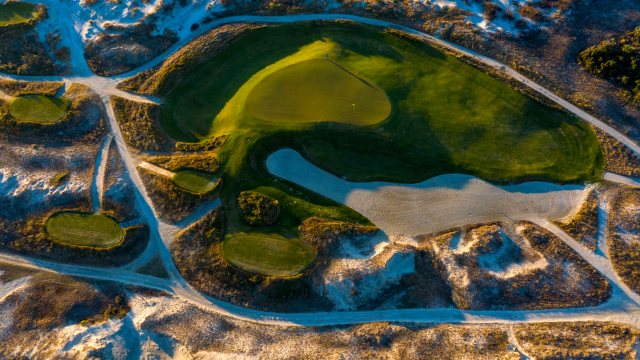 The Ocean Course Overview: The Variety 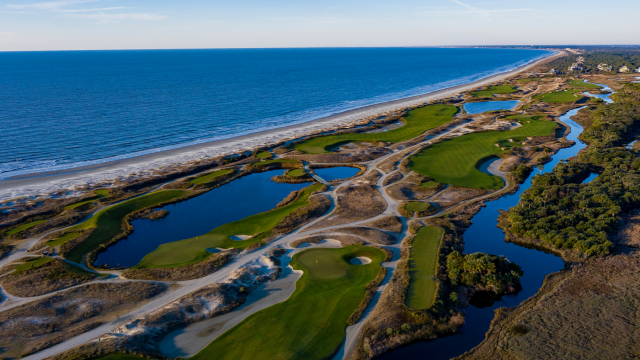 The Ocean Course Overview: The Wind